Origin of the Chaise Longue 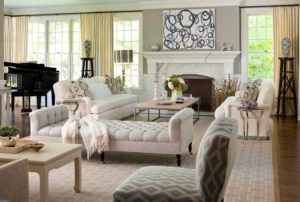 Pronounced as Shayz Long, the Chaise Longue is believed to have its roots in the 16th century France. Design experts also believe it was inspired from the hardwood daybeds of the ancient Egypt, Greece, and Rome where reclining in public was an acceptable norm. By the late 15th century, French designs were being incorporated into the daybed with focus on accommodating a lounging/relaxing posture. The Carolean period witnessed elaborately carved backs, ornamental crests, caned seats, and paw legs being introduced in the daybeds in the 1600s England. The William & Mary era borrowed heavily from the curvaceous Queen Anne style chairs with the addition of elegant cabriole legs to the daybed, while the French kings introduced upholstery into the beds. Transforming aesthetically with the Regency, Empire, and Grecian styles many centuries later, the daybeds in 1800s came to be known as Meridiennes or Chaise Longue. Whether it’s the Rococo revival or the Voctorian era extravagance, the chaise longues continue to be an integral part of our lives, redefining luxury and comfort with their graceful and genteel silhouettes.

Am so glad I came across this page and then met you and got what we really wanted for our living room!
The colors, the fabric, the design and the comfort – we are loving all of it. And so happy to finally have some color in the room!! 🙂

Thank you so much for the wonderful experience.

I used pink chair services to get a chair and ottoman made for my room and I must admit komal was very patient with us right from selecting the chair design to the fabrics etc… She has great color sense… Another thing I would like to share – i wanted to darken the polish off the legs of the chair and komal and team were warm enough to come by our place and do the last bit for us at no extra cost and with a smile. Thanks team pink chair. All the best.

We just love it!! Had a completely hassle free experience working with you Komal! So glad we found The PINK CHAIR!! Thanks for getting into details and helping us with the customization we asked for!

We are loving it. Thank It’s been great working with you. Very simple process because you understood what I wanted. Komal, it was all you! I just told you what I wanted and picked the fabric out of your suggested ones. ‘You’ came up with this elegant design and everything else. It is perfect, so Thank You! 🙂

Komal is not only a great designer, extremely professional in her commitments (fast and always on time) but she has an instinct to accompany you gently towards your dreams! I dont remember anymore what came first if chicken or egg (chair or the rest of design of the whole appartment) but it was a big pleasure to work with you Komal and you helped me feel AT HOME in Bangalore. Thank you!

We were in a fix while redoing our living room. And thank god I came across The Pink Chair. We wanted to do a mix n match with our sofa. Komal is a very engrossed entrepreneur who will get into each and every detail ….ur color scheme…the carpet color, furniture etc. And she made these 2 beautiful accent chairs (Piccadilly) for us 🙂 and I love the brightness of living room now and love to show off 😉 thanks Komal @the pink chair

Thanks for the customisation we asked for and the chair got delivered just before we had guests for new year.
We Thank you for the complete hassle free experience

I love my new furniture!!! thanks for the A-Z service from Idea to Execution!!! Thank you Pink Chair on an awesome job, well done!

Happy with the whole set 🙂 Lots of compliments coming my way for this!

Wow!! They look awesome. Want more of your chairs but have no clue where to place them