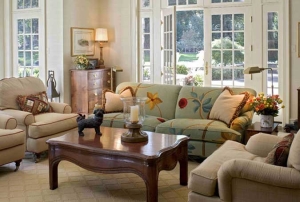 1. English/London Arm: Short, rounded arms, where the seat cushion goes around the front of the sofa arms. Hence, also called English arms with T-cushion. These kinds of arms look beautiful in traditional and/or formal and grand living rooms or rooms which carry a rich history of antiques and vintage hand-me-downs.

2. Lawson Arm: Here the arms are either rolled or square and the seat cushion normally doesn’t wrap around the front of the arm. Hence, also called Lawson arms with Straight cushion. These are perfect for both transitional (formal French Riviera set-up) and traditional homes with a rustic touch (with valance).

3. Sock Arm: Short rolled arms which work well with both the straight cushion and the T-cushion. They have clean lines and hence a good choice for contemporary homes.

4. Pleated Arm: A variation of the sock arm, with tight pleats on the front. Work beautifully in traditional homes but their versatility makes them a cool choice for modern living rooms too.

5. Track Arm: As the name suggests, these arms mean no nonsense, have clean, straight lines with no T-cushion. Absolutely perfect for a crisp, contemporary living room.

We were in a fix while redoing our living room. And thank god I came across The Pink Chair. We wanted to do a mix n match with our sofa. Komal is a very engrossed entrepreneur who will get into each and every detail ….ur color scheme…the carpet color, furniture etc. And she made these 2 beautiful accent chairs (Piccadilly) for us 🙂 and I love the brightness of living room now and love to show off 😉 thanks Komal @the pink chair

Happy with the whole set 🙂 Lots of compliments coming my way for this!

We are loving it. Thank It’s been great working with you. Very simple process because you understood what I wanted. Komal, it was all you! I just told you what I wanted and picked the fabric out of your suggested ones. ‘You’ came up with this elegant design and everything else. It is perfect, so Thank You! 🙂

Komal is not only a great designer, extremely professional in her commitments (fast and always on time) but she has an instinct to accompany you gently towards your dreams! I dont remember anymore what came first if chicken or egg (chair or the rest of design of the whole appartment) but it was a big pleasure to work with you Komal and you helped me feel AT HOME in Bangalore. Thank you!

Wow!! They look awesome. Want more of your chairs but have no clue where to place them

I love my new furniture!!! thanks for the A-Z service from Idea to Execution!!! Thank you Pink Chair on an awesome job, well done!

Thanks for the customisation we asked for and the chair got delivered just before we had guests for new year.
We Thank you for the complete hassle free experience

We just love it!! Had a completely hassle free experience working with you Komal! So glad we found The PINK CHAIR!! Thanks for getting into details and helping us with the customization we asked for!

Awesome collection, great design…Now I think I know where to come from for new sofa’s and chairs when I start doing my new home…I hope you guys would be able to deliver in Pune too !!!!

Am so glad I came across this page and then met you and got what we really wanted for our living room!
The colors, the fabric, the design and the comfort – we are loving all of it. And so happy to finally have some color in the room!! 🙂

Thank you so much for the wonderful experience.